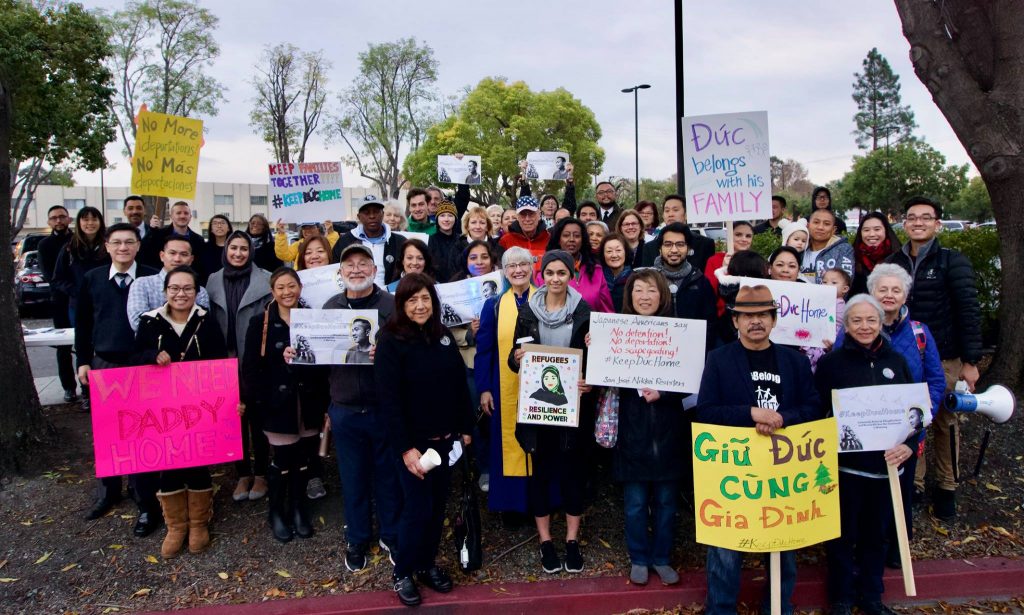 Last Tuesday, Dec. 4 at 6:30am, Asian Law Alliance staff came to support Duc Nguyen along with VietUnity South Bay, People Acting in Commmunity Together (PACT) and the Santa Clara County Rapid Response Network. USCIS (United States Citizenship and Immigration Services) notified Duc of an impromptu interview on this day; these requests have often led to deportation as ICE (Immigration and Customs Enforcement) agents have reported to be at these last-minute interviews waiting to detain unsuspecting community members.

Due to immense community support and pressure, Duc’s interview was cancelled at the last minute. We were very happy to have heard the good news and will continue to protect community members against deportations! Please see VietUnity South Bay’s statement below regarding this victory:

Đức, his family, ViệtUnity, and PACT are happy to let you know that our efforts as a community produced a win today. On the same day that Đức courageously went public with his story, that we rallied our community in the streets and in the media, that we called upon the support of public officials who understand the plight of the people they represent, and that we marshalled the moral voices of our diverse faiths, immigration officials decided to cancel their demand that Đức appear for an immigration interview where he was at risk of deportation. We had planned an act of resistance and it became a celebration!

Đức is safe today but he (and many others in similar situations) may again be put at risk by the capricious decisions of Immigration and Customs Enforcement. We will continue to be in community with Vietnamese, Cambodian, and other Asian Pacific Islander community members in the South Bay who are being threatened with deportation. If you are being threatened by ICE or interested in joining the movement, please connect with us at vietunity.southbay@gmail.com.

Asian Law Alliance, established in 1977, is a non-profit organization providing equal access to the justice system for Asian Pacific Islander and low-income populations in the Silicon Valley. Our mission is through providing legal counseling, community education and community organizing, we promote self-sufficiency, self-reliance, and a better quality of life for all.